Is the Honda CB300F a good beginner bike?

It has a 6-speed transmission and weighs just 157 kg. The motorcycle has a smaller 12.90-liter fuel tank and no front fairing because of heavy tank shrouds and a thin headlight fairing.

The Honda CB300F’s narrowness makes it one of the most agile bikes on the market. Its ability to maneuver in dense traffic makes it ideal for commuting in populated urban traffic.

Its single-cylinder engine, low 30.7-inch seat height, and compact 348-pound curb weight all contribute to this. What you get is a bike that is easy to stop at a stoplight and fun to ride before the light turns green.

The Honda CB300F is definitely worth buying and is a good beginner bike due to its low cost, lightweight, comfortable riding position, good brakes, and agile handling.

The Engine. How fast is the Honda CB300F?

The top speed of the Honda CB300F is approximately 145 km/h (90 mph) and propelled by a 286 CC single-cylinder water-cooled engine producing 31.4 HP.  The smoothness is the first thing you’ll find about the Honda.

The clutch, engine braking, and suspension are all silky smooth. Honda’s 286cc single-cylinder engine has a counterbalanced crankshaft that eliminates friction. The engine is identical to that used in the CBR300R, and the additional 37cc compensates for my Ninja’s lack of low-end torque.

My morning commute is much less of a high-revving affair thanks to the increased torque and the close-ratio 6-speed transmission.

The CB300F employs a single-shock preload-adjustable rear suspension, which not only provides a smooth ride but also aids in handling, as seen on some of our larger sport versions.

The CB300F’s single-cylinder has the additional advantage of being compact. This improves the hold on the tank and makes you get up and off the handles.

The bike is about the same height as last year’s Honda CBR250R, but it has a skinnier profile, so your feet are closer together at a stand.

The Honda CB300F is heavily inspired by the original CBR300R, as shown by the handlebars, mudguards, seats, tail ends, exhaust, and rear footpegs.

The CB300F has a single-shock preload-adjustable rear suspension, which not only offers a smooth ride but also improves handling, as seen on some of our larger sport versions.

With the CB300F, less is enough. The minimal bodywork on this unit gives it a smooth, open naked styled sport bike look that is not only cool but also allows it to be lighter.

The CB300F has hydraulic disc brakes on both the front and rear with excellent stopping strength and feel. The single front 296 mm and rear 220 mm hydraulic discs keep it easy while still lowering unsprung weight.

With a separate passenger bench, incorporated grab bar, and regular passenger footpegs, you can ride with a friend–yet another example of the CB300F’s versatility.

The Honda has a simpler 2-piston sliding caliper setup, but it is undeniably superior to the BMW’s and currently best in class…. even among 300 cc sportbikes. This bike has the best feel, speed, and fade of any comparable bike in this category.

The Honda has a better transmission. Really accurate, fast throws with just the right amount of effort, but I did note it was a little more vulnerable to getting caught in gear while not kicking up hard enough, going too slowly/not moving than the BMW.

In comparison to the oddly geared BMW, which has an awkwardly tall first gear, the transmission is extremely well geared.

The BMW is unquestionably quicker almost anywhere but off the line in first gear, where the Honda feels similar due to gearing.

The Honda’s headlights are excellent, much better than the BMW’s.

The CB300F’s huge and unsightly, heavy exhaust (integrated catalytic converter) gets incredibly hot and takes 30 minutes to cool off, while the G310R has the cat in the headers, a much smaller pipe, and one that cools down in a matter of minutes. This is important if you want to use a cover without melting it. 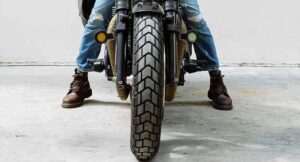